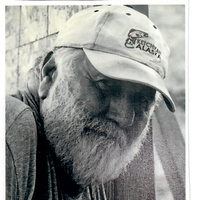 Order Flowers for the Family

SEND A CARD - Show Your Sympathy to the Family

Joseph F. Parini passed away unexpectedly Thursday evening at his home. He was born
June 7, 1940, to Joseph and Antonia Parini. He grew up on Woodville Hill and spent a
lot of time on the family ranch at Elk Park. Joe at one time was offered a job to be Teddy
Kaparish’s chauffer, but Joe’s dad said, “No, he doesn’t have a license.” He started his
working career at Main Public Market as a butcher. He then went to work as a plumber
for Jolla Murphy Plumbing, and ended his career as a hod carrier for Leonard Hoschied
Masonry. He was a jack-of-all trades. Joe married Betty Peas and from that union he
was blessed with two beautiful daughters Lauri and Jolene. The marriage ended in
divorce. In 1988 he met Paula Waddell. they were married in 1995 and recently
celebrated their 25th anniversary. Joe loved hunting, fishing, gardening, riding his side-by-side with his brother Pete and family, and spending time with friends and family. Joe
enjoyed a cruise to Alaska, a fishing trip to Alaska with Jeff, Cole, Bill and BJ, and yearly
trips to Idaho to spend time with his daughters and grandchildren. He recently celebrated
his 80th birthday with family and friends.

Cremation has taken place. Family will greet people at 12:00 p.m. to 3:00pm at the McQueen Club.. MASKS ARE REQUIRED. In lieu of flowers memorial donations may be made to The Heart Institute at St. James or a charity of the donor’s choice.

To send a flower arrangement to the family of Joseph F Parini, please click here to visit our Sympathy Store.