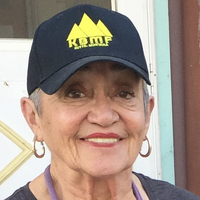 On Tuesday, June 22, Zena Beth McGlashan, an indomitable spirit, a champion of Butte, an author, a professor, a mother, a wife, and a friend, died of cancer with family and loved ones by her side. She was 81.

Born in State College, PA on July 19, 1939 to Evelyn Jones McGlashan and Donald McGlashan, Zena lived in several states during the end of the World War II because of her father’s military service. Her father accepted a position at the Montana School of Mines in Butte, MT when Zena was in second grade where she met life-long friends. She grew up on West Quartz Street and graduated from Butte High in 1957. She was an active participant and organizer of their reunions for years to come.

In 1961, she received her B.A. in Journalism from the University of Montana where she was a member of the Kappa Alpha Theta sorority. She was active on campus and was awarded a San Francisco-based internship working in the Marketing Information Division of the Department of Agriculture in 1960.

After graduating, she worked at the Montana Standard in Butte for the summer, The Daily Inter-Lake during the fall and the Missourian from 1962-65. She married Gaylord Guenin, also a University of Montana Journalism School graduate. They moved to Iowa for a short period and returned to Montana where they had two children.  In 1970 they moved to Aspen for positions at the Aspen Illustrated News, where lived there until their divorce in the early 1970’s.

It was then Zena went back to working full time as the editor for the Albuquerque Journal’s Home Living Section. With two little children to care for, Zena decided to get her Master’s degree and start teaching.

She earned her M.A. in Mass Communication from California State University, Northridge, where she taught as well. During the summers she was staff writer for the Santa Monica Evening Outlook.  She was a student-favorite and made sure to enjoy the Southern California lifestyle by taking her children to the beach often, to Knott’s Berry Farm and to Disneyland.

In 1974 she moved to Iowa to work on her Ph.D. which she earned in 1978 from the University of Iowa. It was there she met and married Harley Straus, and where Zena Beth Guenin once again became Zena Beth McGlashan.

The family moved to State College where Zena was an Assistant Professor at the School of Journalism from 1977 until 1980 when she accepted a position as a Professor at the University of North Dakota. She taught there for ten years, achieving full professor with tenure in 1988. She was passionate about her students and was in contact with many of them years after leaving UND. She specialized in editing, reporting, graphics, history, media & cultural diversity and women studies. She spent one year as a Visiting Professor at University of Texas at El Paso in the Department of Communication.

Her husband, Harley, died in 1989 and it was then Zena left teaching and moved back home to Butte.

She first worked as a continuing education coordinator at Montana Tech before venturing out to pursue her passions. It was also during this time she met and married Michael Gamble.

In 1994 she started Wordz & Ink Publishing and established her office in the Carpenter’s Union Hall. She published “The M&M in Butte, Montana and Other Faces: Photography by Harley E. Straus.” She also edited several other books and had multiple clients through the years. She especially loved writing feature stories on Butte locals for The Butte Weekly.

In 2010 she published “Buried in Butte”, a book she spent many years researching and writing. It’s still available today and is on its third printing. In 2019 she wrote the “The Watchman’s Daughter” an afterword included in the 2019 printing of “The Biography of F. Augustus Heinze: Copper King at War”.

Zena was an extremely active Butte resident and a dedicated life-long Democrat. She served on many boards including Butte Local Development Corp and Butte Uptown Association and was the secretary for Butte-Silver Bow Democrat Burros Club from 1995-2003 and again from 2008-2013. In 2013 she formed Friends of Butte Celebrations in order to assure continuation of the St. Patrick’s Day and 4th of July parades.

Zena was so much more than all of her accomplishments and work. As one of her friends said, “She was a feisty and funny loyal friend who looked fabulous in baseball hats, was dedicated to social issues, was an amazing historical researcher, was generous and put her money where her mouth was, had incredible knowledge of antiques, and was patient enough to get orchids to bloom again. She was the best friend anyone could ask for.”

Zena is survived by her husband, Michael Gamble, her children, Grant McGlashan, Meg Guenin and many friends.

To send a flower arrangement or to plant trees in memory of Zena Beth McGlashan, please click here to visit our Sympathy Store.