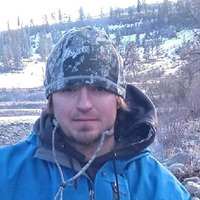 On April 06, 1989, the Lord blessed Dale and Roseann (Venner) Carpenter with a retirement present, David Joseph Carpenter. David was the youngest of their six children and the apple of his sibling's eyes. They would jokingly refer to him as 'King David'. Growing up on the family ranch in Melrose was where his adventurous life began. As a child David was able to learn the necessary skills of cattle ranching from his father. He was taught love, compassion, and caring for others from his mother. Traits he would carry throughout his life.

He was educated in Melrose Elementary with his life-long friends Jake Kearns and J.M. Peck. David graduated from Beaverhead County High School in 2007 and was a member of Beavers 2006 Championship Football team.

Dave's passion was fishing. If there was a fish, he wanted to catch it. He often would say he was taught by the best, "Decker".Steelheading with his extended family the   D’Arcys (whom he loved dearly) was his favorite.

Hunting was his second passion. Bow hunting with Tom John and McLeod was his favorite. He loved rifle hunting with his father, brothers, and sister-in-law Twylla. Dave also was passionate for motorcycling/snowmobiling with his best friend Jory Lawrence and floating the Big Hole River with his buddies.

David and Rachel Yerkich were married April 12, 2013. From that union, they were blessed with their two beautiful children, Coy Leighton (7) and Charlee Rose (5). They later divorced yet remained friends. The role of father was our David's destiny. There was nothing he loved more than his children. Camping at Browns Lake, fishing the ’Gates', floating the Big Hole, hunting in Melrose and Elk Park; everything he loved to do he wanted his children to learn and love, which they did. A day never passed that Dave would not share a milestone or accomplishment of his two precious babies. They were his everything!

David's work career started early on the Ranch with his father and brother Travis. He realized working with his hands was what he anted to do. He worked as an Apprentice Carpenter building the Meriwether Ranch, Tobiness Construction, and helping his big brother, Dale, on rental properties. He later landed a job at Montana Resources where he worked for several years on the maintenance crew. From there he worked at Rocky Mountain RV for a short period before going to work at Silver Bow Truck Center. David Joseph Carpenter was killed in a tragic accident on March 15, 2021 at 4:10 PM; an explosion while attempting to repair a holding tank is what took his life on earth.

Funeral Mass will be celebrated on Tuesday at 11:00 am in the Immaculate Conception Catholic Church. David’s ashes will be laid to rest at the home ranch in Melrose. Memorials can be made to the Coy & Charlee Education Fund, in care of Glacier Bark, or a donor's choice. Please observe all public health COVID regulations.

To send a flower arrangement or to plant trees in memory of David Joseph Carpenter, please click here to visit our Sympathy Store.